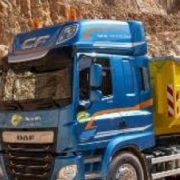 DAF Trucks is expanding its range of products in the UK to include new models and axle configurations. The new range includes:

These new developments underline DAF Trucks’ commitment to expanding its presence in UK industry sectors such as construction and waste handling.

The new CF and XF configuration adds to an already extensive range of trucks available. The FAW, a four axle CF or XF rigid with a tridem consists of the SR1360T tandem with a single reduction or the HR1670T tandem with a hub reduction and a steered rearmost axle. These will be available ex-factory later this year.

The 8×4 ‘FAW’ chassis has a GVW of 32 tonnes and can be manoeuvred with great precision due to the steered trailing axle and the turning circle of about 15.6 metres makes it ideally suited to transporting loads to sites where there is relatively little space. The new chassis is ideal for operation as a concrete mixer, tipper, for bodywork with a rear mounted crane or a combination of a loading crane with a hook lift system.

The ‘FAW’ joins its stable mate tridem rigid, the single-drive DAF CF ‘FAQ’ in meeting the demands for highly manoeuvrable four axled rigid vehicles that give access in some of the tightest locations previously only accessible to six wheelers. The FAQ’s single drive axle and three steered axles minimise tyre scrub and yard damage whereas the new FAW’s double driven tandem bogie gives it an improved traction for off-road use.

The popular CF configuration of an 8×2 rigid with 2 steered front axles (8 or 9 tonnes) and a steered trailing rear axle (7.5 tonnes) is now also available as the new ‘FAX’ XF.

The new XF offers a 32 tonne GVW and a 44 tonne GTW drawbar and its steered trailing ensures maximum manoeuvrability. This vehicle is ideal for delivering building materials and for when there is a need to have a crane mounted behind the cab.

The traditional 8×4 set-up with two steered front axles and double drive rear bogie is now available as an XF in the UK for operators who want maximum cab space and storage. Typical applications include use as recovery vehicles for use with heavy lift and long reach cranes.

Operator demand for the larger cab for certain applications is the reason the new ‘FAX’, ‘FAD’, and ‘FAW’ ranges have been introduced. Whilst the CF is the ideal choice for some, increasing numbers of operators require the additional space, storage and comfort that comes with an XF cab, especially when there is a lot of kit that needs to be stored in the cab or operations are double manned. The excellent sleeping and living space makes the XF the ideal workplace for drivers too.

In the second half of this year a 10 tonne front axle in the CF and XF ranges will be added to the existing options of 7.5, 8 and 9 tonne front axles. This addition is good news for the construction sector where high front-axle loads are commonplace, normally when a heavy crane is mounted directly behind the cab. The parabolic suspension with three leaf springs in the new 10 tonne front axle will reduce the risk of overloading with diminishing loads and will be available for configurations of the CF and XF which feature single front axle and are powered by the PACCAR MX-11 or MX-13 engines.

The new 7.5 tonne trailing non-steered axle with single wheels features a newly-designed die cast axle housing. Whilst it has greater rigidity and is more robust than its predecessor, its weight has been reduced by 10kg. The static load capacity has been increased by a substantial 25% to 26 tonne which is of great importance if a load rests briefly on the rearmost axles during loading and unloading. A typical example of this is roll-on-off containers.

Again, the construction sector is set to benefit with this new model as it is ideal for use on payload sensitive work and for container delivery systems where vehicles are equipped with rear mounted cranes. The new trailing axle is also used on the FTR tractor unit variants of the CF and XF which makes it ideally suited to low loader work above 44 tonnes.

If you would like further information about these new vehicles, or any truck in the award-winning DAF range, please get in touch with the Watts Truck & Van Sales Team:

This site uses cookies. By continuing to browse the site, you are agreeing to our use of cookies.